Tales from the Burrows 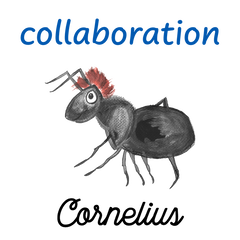 ​First thing Monday morning, just as the birds were clearing their throats and preparing to sing the world awake, the roof fell in!

“That’s not a good start to the day,” Cornelius Ant grumbled to himself, shaking the soil from his legs and blinking it out of his sleepy eyes.

The poor ant felt a sudden zing of panic shooting along his antennae, time to leave he thought, taking an extra deep breath, before scuttling back up along the crumbling tunnel as fast as his six nimble legs could carry him. After, what seemed to Cornelius, to be a very long time and a lot of toiling through the fusty soil, he finally broke through the surface, gulping in the damp morning air with relief. “Not again” he thought, crest fallen. This was not the first time his tunnel had collapsed or even the second, Cornelius could work from dawn till dusk, digging frantically until his legs went all wobbly, but he had never yet succeeded in completing his home.

Cornelius sat in a slump, his mouth was turned down and his eyes downcast, the word glum, if it were a picture, would look exactly like Cornelius. Just then another ant scurried out from under a bush, then another, then another and another, each carrying a juicy slice of privet leaf almost as large as themselves. A jiggling throng of ants trooped by, like a marching band. Cornelius was fascinated! He shot to his feet, gave a little shimmy and began to follow the ants by scooting into the line and falling in step, left right, left right. The line ahead began to descend and soon enough Cornelius found himself underground tasting the cool dark air as it swished around his mouth. It was only then that he realised that his mouth was gaping open in awe and surprise, a marvellous magical maze of tunnels and chambers opened up, Cornelius could not believe his eyes.

“Are you okay?” asked a small, gently spoken ant with kind brown eyes.

“I just wondered which magnificent beast created all this,” gestured Cornelius with his front feet.

“We did silly,” chuckled the ant.

“No way!” exclaimed Cornelius. “But you’re so small like me.”

“Collaboration is the secret,” she replied.

“Collabor what?” stuttered Cornelius. “I’m sorry but I don’t understand.”

“That’s okay,” she smiled “To collaborate is to work together, as a team, supporting one another.”

“Wow,” breathed Cornelius, this made him think. Alone he had struggled, but it seemed that together ants were strong and could easily achieve what he alone had thought impossible. “Would I be able to join you and give this collaboration thing a go?” he asked, hoping she would say yes.

“Why of course, come and join us, together we can do almost anything.” She handed him a leaf and the ants all marched on. And if the word happy were a picture, it would look exactly like Cornelius did now.